As a monumental sculpture of modernity, the ‘Kraftwerk’ stands in the center of the premises and attracts all eyes. Now the turbines of the former power plant of the Tabakfabrik Linz, built between 1933 and 1935, are being fired up again. Creative brewer Martin Simion and the Tabakfabrik have jointly developed a concept for the renovation and future use of the ‘Kraftwerk’. A total of around seven million euros is being invested in the revitalization of this listed industrial gem. A multifunctional auditorium, a restaurant, and a brewery facility for local ‘Linzer Bier’ will be built in the Tabakfabrik Linz. The construction and utilization of the brewery and catering facility will be carried out by ‘Brau Union’. The construction work will start in summer 2020, with completion scheduled for fall 2021.
“As part of the collaboration between the Tabakfabrik, the University of Art and Design as well as the Johannes Kepler University, the auditorium in the Kraftwerk of Tabakfabrik Linz will become an innovation laboratory for the realization of scientific projects. The goal is to intensify the transfer of know-how and technologies between universities and companies or society. After all, the myth of the lone inventor is long outdated. In our networked world, it’s thinking outside the box that leads to creative new solutions and lays the foundation for technical, economic or social innovations,” says Mayor Klaus Luger, Chairman of the Supervisory Board of Tabakfabrik Linz.
“As the driving force of the industrial site, the Tabakfabrik Linz power plant is sitting enthroned centrally in the heart of the factory complex – and is therefore predestined to remain the focal point of activity in the future. Students and teachers from natural science, technology, humanities, arts as well as social science departments will work together there to develop, research and implement ideas to meet complex social challenges with novel solutions,” says Chris Müller, director of development, design and artistic agendas at Tabakfabrik Linz.

“The long-term cooperation with the brewery enables us to carry out a very high-quality renovation and adaptation of the Kraftwerk at a total cost of around seven million euros. At the same time, the location of a small brewery plant in the heart of the site is a nice reminder of the factory’s history as a place of production,” explains Markus Eidenberger, commercial director of Tabakfabrik Linz.
“For more than ten years, I’ve been involved with the beer history of Linz, and I think it’s about time that the city of Linz got its own brewery again! As a Linz resident, I’m particularly pleased that we’re being allowed to build a brewery in the Tabakfabrik, the city’s creative center. This means that a brewery is once again being built on Linz’s Donaulände, in an area where breweries have existed for several centuries,” says creative brewmaster Martin Simion. 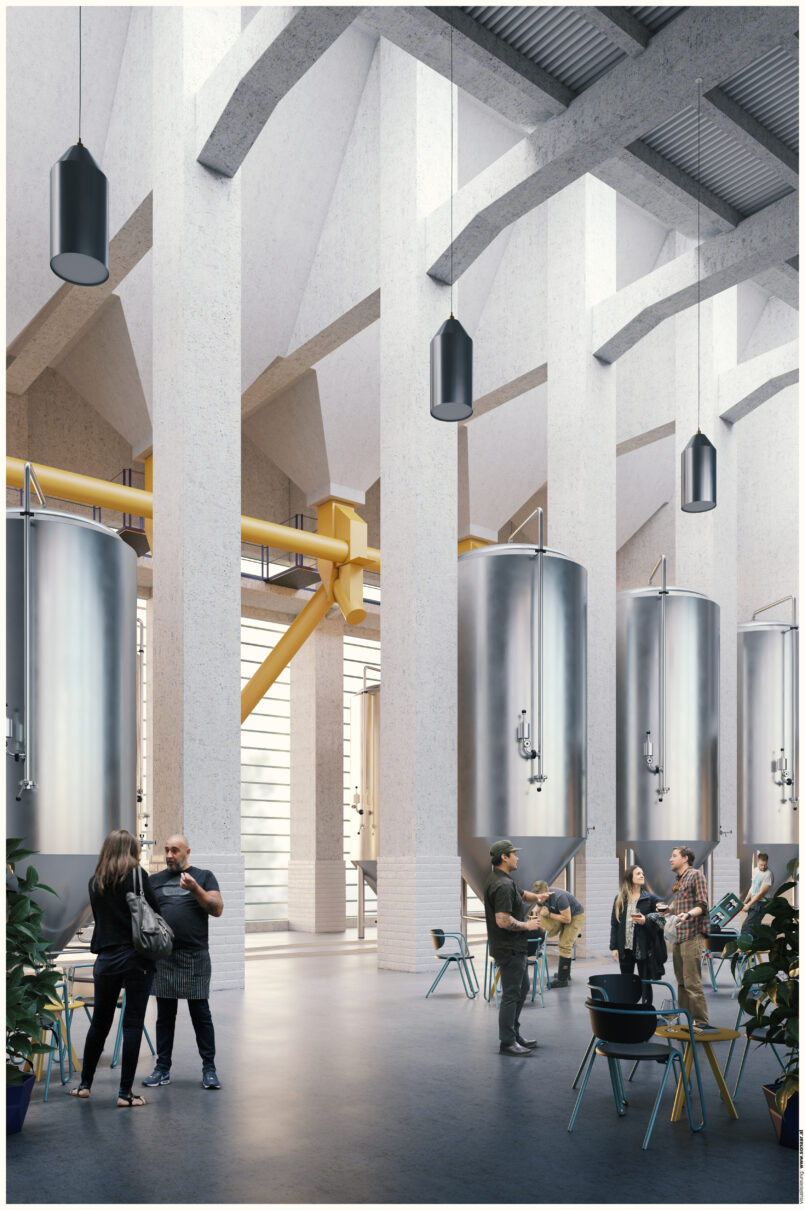 The power plant of the tobacco factory was once powered by coal, later by oil and gas – today it is to be operated with innovative power and produce intellectual energy for society in the future. Since 2016, the Linz University of Art and Design and the Johannes Kepler University have been working together with the Tabakfabrik to position the ‘Kraftwerk’ as a powerhouse of interdisciplinary research. The goal is to create an environment that promotes inter- and transdisciplinary research as well as the unfolding and analysis of creative processes.  In the spirit of its former function, the ‘Kraftwerk’ thus becomes the driving force for research projects that enable and support creativity, experimentation and exchange between universities, disciplines and fields of practice.
The power plant’s boiler hall ‘Kesselhalle’, which is being transformed into a multifunctional lecture hall, serves as the engine of science. The hall is several stories high and offers a unique atmosphere for lectures, congresses or evening events as a spectacular location with different levels. In order to provide gastronomic services for the multifaceted event program in the ‘Kesselhalle’, the ground floor of the ‘Kraftwerk’ will offer space for a new gastronomy unit.

beer instead of oil

Where the pipes once transported gas or heavy oil, beer with a very special recipe is to bubble in the future. To preserve the ‘Kraftwerk’ as a historic place of production, the remaining areas will be used for a craft beer brewery. This is a small, fine brewery facility with no significant incoming or outgoing traffic. For example, the former boilers in the power plant’s imposing boiler hall are replaced by fermentation vats and storage tanks. The old walls of the power plant will be used to create classic ‘Linzer Bier’ varieties as well as changing creative beer varieties with unusual ingredients, which will tie in with centuries-old brewing traditions and consistently develop them further.
With the establishment of the ‘Linzer Bier’ brewer in the ‘Kraftwerk’ of Tabakfabrik, the Upper Austrian capital is regaining a piece of its identity – for the first time in around 40 years, beer is being brewed again in Linz.