Information documents for press conference by Councillor Stefan Giegler and Financial Officer/Deputy Mayor Christian Forsterleitner on the topic of ‘Centrepiece of Tabakfabrik is to be renovated’ at 10 a.m. on Thursday, 30 October 2014 in the Klub Kantine canteen at Tabakfabrik.
You may also contact: Chris Müller, MA, Director of Tabakfabrik

BUilding 1 and Warehouse III To be Renovated for 6 mill. EURO –

Tabakfabrik has developed into a centre for creative industries, socially-committed initiatives, for educational and research institutions and for novel manufacturing sites and workshops. So far a total of approx. 300 new jobs have already been created. This means that more people are already working at Tabakfabrik than before the former tobacco factory was shut down in 2009. Currently, 70 organisations – including companies, institutions and sole entrepreneurs – have become tenants.

Particularly pleasing is the fact that the international creative supplies wholesaler Boesner has opened a flagship store at Tabakfabrik on the ground floor of Building 1. – At approx. 1,000 m² in floor space, this will be the third Boesner branch in Austria, alongside Vienna and Graz. The Linz branch is to open in the coming year, creating ten new jobs.

Following the successful revitalisation of Building 2, the next step planned is the refurbishment of Building 1 and the adjacent Warehouse III. The budget for the development planning has been set at 6 million euro over the next four years, and will be submitted to the Linz City Council on 20 November 2014 for adoption. The investment will pay off and will help make Tabakfabrik become profitable in the long term: the influx of tenants creates new jobs, generating rental income for the benefit of Tabakfabrik. The investments are thus projected to pay off within the next 15 to 20 years.

“Tabakfabrik as a building complex is an architectural gem, and as a district it links the city centre and to the Danube port area, which is to be redeveloped. Even now, more people are employed in this historically significant workplace than before it was shut down. The renovation of additional premises will allow this beacon of the creative economy to increase further in value and demand, opening up new opportunities for the former tobacco factory as a production location.”

“Tabakfabrik is an urban development project acclaimed all around Europe. It is a symbol of neo-industrialisation and a prime motor for Linz, importantly interconnecting the fields of creativity, innovation and social responsibility. With the conversion and renovation of Building 1, we the City of Linz are making a further important contribution to the sustainable development of Tabakfabrik.”

Building 1, the former cigarette fabrication plant, is the elongated, slightly curved building wing located in the southern part of the Tabakfabrik complex. What is impressive is not only its dimensions of 226 meters in length, seven floors and 30,000 square meters of space, but also the clear lines of its New Objectivity design and the fact that it is one of the first major steel-frame buildings erected in Austria. Each floor of Building 1 consists of a curved, pillared hall extending on almost all floors across the entire length of the building.

The horizontal structuring of the space should follow the logic of a production chain. Art, research and education will be located between Stairwells A and B; design and creative industries will be between Stairwells B and C, whereas trades and crafts will be located between Stairwells C and D. The vertical layout will be determined based on the type of product, industry and cooperation. For instance, a fashion and textile manufacture focus could be created, spreading across an entire level of the building.  The workings of the production chain would be physically visualised as a horizontal array of individual steps.

These measures include fire prevention, basic installations and the modernisation of the elevators in the existing four elevator shafts.

The existing areas are to be modernised in different development stages, in consultation with the future tenants. The possibilities range from pared-down open-plan concrete structure to luxuriously appointed room-within-a room systems. The revitalisation costs will range from 600 to 1800 euros per square metre, accordingly.

Slight adaptations are to be made to Warehouse III, to create storage areas that can be made available to Building 1 tenants. In addition, Warehouse III is to be home to Tabakfabrik Linz GmbH’s in-house workshop.

The initial stage to take place in the coming months will consist of the planning steps necessary for the overall refitting concept, and the first infrastructure installations. Further expansion work will be done in the second phase lasting from autumn 2015 until spring 2018. Calculations, based on the average refitting requests received, indicate that up to 8,000 square metres – almost a third of the full Building 1 floor space – will be refitted.

A combination of fixed retail spaces, multi-purpose event locations and showrooms will add spice to the ground floor. Access will be via the four staircases. There will be further accessways available via Lösehalle [the release hall]. In Building 1, the original character of the former tobacco factory has been largely retained. Successful examples include the WearFair & More fair (see picture). 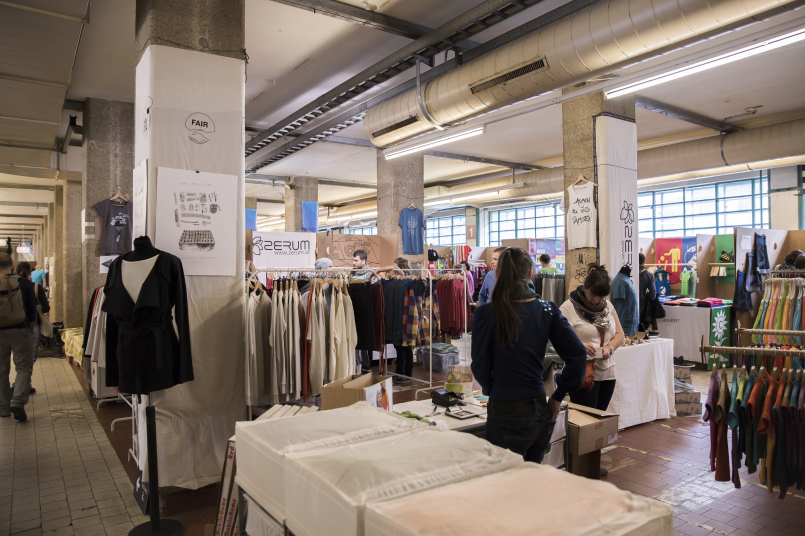 Warehouse III can be reached from Building 1 directly via several connecting passages. The ground floor, with its link to the rear entrance and the two freight lifts, is somewhat of a central logistics hub. This makes Warehouse III ideally predisposed for use by tenants of Building 1 as a storage area. The ground floor is also intended to provide a home for in-house workshops.

With regard to the logistical logic of the complex, there is one significant trait of Tabakfabrik that needs to be appropriately considered in the redesign of Building 1: the Behrens-Band (Behrens Belt, named after the creator of the former tobacco factory, -ed.). The central inner link, formed as a logistical ring road internally linking all the buildings clustered around the courtyard, enabling a kilometre-long tour of the entire architectural complex. This needs to be retained for posterity. The unifying Behrens Belt is the architectural visualisation of the substantive concept behind Tabakfabrik and therefore ideally predisposed as a unique selling feature.

Tabakfabrik, a model of success

The 253 tenancy requests from companies, sole enterprises, cultural associations, social services and start-ups for a total of 56,150 m² of rental space at Tabakfabrik show the great need for an expansion of Building 1 with its overall area of 30,000 m² spread across seven floors.

Numerous international invitations to present the Tabakfabrik concept as example of best practice at urban development conferences and ‘future congresses’ in e.g. Munich, Vilnius, Berlin and Vienna are unmistakable proof of the project’s high level of innovation and success. The sensitive style of transformation and design of the tobacco factory is recognised internationally as a successful model.

Located at the intersection of the city centre, the Danube and the port, Tabakfabrik not only bridges the gap between the centre, the neighbouring arts and leisure space along the Danube waterfront and the evolving port district, but also plays a key role in shaping the Linz of the future through its focus on the arts and creative industries. The former tobacco factory is being developed in sync with the key urban planning strategy to expand downtown Linz eastwards across the industrial areas of the Danube port and the Voestalpine industrial complex. The planned construction of the second tramway trunk line will link Tabakfabrik into the tram network.

The Fashion – Design & Technology degree programme offered by the Linz University of Art & Design, starting up in autumn 2015, is to take up residence in Building 1 of Tabakfabrik. Attractive work spaces for students are to be created here following the successful creation of similar areas in Building 2.

The history of Tabakfabrik dates back to the state’s establishment of a tobacco factory (an emergency economy stimulation measure) in the former wool mill in 1850. The complex was rebuilt in the years 1928-35 to designs by architects Peter Behrens and Alexander Popp.

Construction began in 1930 with the five-story, reinforced concrete Tabakspeicher 2 (Tobacco Silo 2). This was followed by the elegantly curved cigarette production building (Building 1) with a basement and six floors above ground, measuring 226 metres long, 16 metres wide and 28 metres high. The structure is built around a 3,000-tonne steel skeleton. In the spring of 1932, construction began on the six-story pipe tobacco factory (Building 2). Subsequently, the power plant in the courtyard was erected with the help of concerted fundraising activities. The tobacco factory was opened on 12 November 1935.

In 1981-1982, the expansion on the western side of the site, which had already been planned in the 1930s, with completed in the form of Building 3 by the architects Suter & Suter. Building 3 housed the administration, the final packaging area, a high-bay warehouse and the salesrooms. Building 3 and the Warehouses A and B built in 1969 are the only non-heritage-listed buildings in the former tobacco factory complex.

Privatisation and purchase by the city of Linz

In 1997, the Republic of Austria transferred its shares as the sole owner of Austria Tabak to ÖIAG, the now defunct Austrian Industry Administration Aktiengesellschaft (company limited by shares). The ÖIAG sold 49.5 percent of its shares to institutional and private investors. In 1999 a further 9.4 percent of the shares were sold to institutions. In 2001, the company Austria Tabak was privatised and 41.1 percent sold to the UK-based Gallagher Group, which successfully submitted a take-over bid. The company was then acquired in 2007 by Japan Tobacco International. In 2008 the decision was made to close the Linz tobacco factory. A year later, the Japanese company ended its cigarette production in Linz, bringing a 159-year era of Austrian industrial history to a close. Repurchased by the City of Linz in December 2009, the predominantly heritage-listed building complex of the former tobacco factory was able to be saved and made available for new, more future-oriented purposes.

Between February 2013 and January 2014, Building 2 (headquarters) of the former Linz tobacco factory, located on the banks of the Danube, was converted into a contemporary office building with all the charm of a historic industrial monument.

The co-working loft Axis is situated on the first floor. The second and third floor are rented out by the agency Netural, which specialises in digital media. The architects Kleboth Lindinger Dollnig, the DonauRAUM real estate agency and the agency Kernkompetenzen (core competencies) have moved in on the fourth floor.

Each level of Building 2 offers around 600 square metres of floor space. The City of Linz has spent EUR 5.52 million on the renovations. The reconstruction was planned the Kleboth Lindinger Dollnig agency and project-managed by the municipal property management department.