In February 2021, things will get underway: The Bodner Group from Kufstein will start the demolition work for the large-scale construction project at the Tabakfabrik. The permits have been obtained, and the preparatory measures for the construction are on the home stretch. The four-part building ensemble and dream project of the Linz city government will be called “QUADRILL”. The centerpiece of the new quarter, which will create new living and working space on a floor area of 10,900 m2 in the unique Tabakfabrik Linz creative center, is the 109-meter-high QUADRILL Tower. It will be Austria’s tallest office and hotel building tower outside of Vienna. Completion is scheduled for 2025.
The “QUADRILL” in the Tabakfabrik Linz is one of the most exciting large-scale urban development projects to be built in Austria’s provincial capitals in the next few years. The Bodner Group from Kufstein unanimously emerged as the winner in the EU-wide bidding process with its design by the renowned Viennese architects Zechner & Zechner to realize the sensitive transformation of the existing and not heritage-protected area of the old tobacco factory in Linz into a modern living and working space. The Upper Austrian company DYWIDAG, Dyckerhoff & Widmann Gesellschaft m.b.H., will construct the spectacular building ensemble in a joint venture with Bodner. DYWIDAG is a specialist for large-volume building and industrial construction and has been part of the Bodner Group since the beginning of the year.
The business location, which is already home to more than 250 start-ups and companies – mainly in creative industries and digitalization – is to gain additional importance through the QUADRILL. The expansion alone will create space for 1,000 additional jobs at the Tabakfabrik Linz. “The entire new building and especially the QUADRILL tower will become a defining landmark in Linz and make a statement both architecturally and in terms of content. The fact that a project of this structural quality is being built in Austria next to the listed Tabakfabrik is economically crucial at a time when we are fighting for every job in Linz. The construction at a cost of 190 million euros is also proof that private investors have confidence in the city of Linz,” says Mayor Klaus Luger, Chairman of the Supervisory Board of Tabakfabrik Linz. 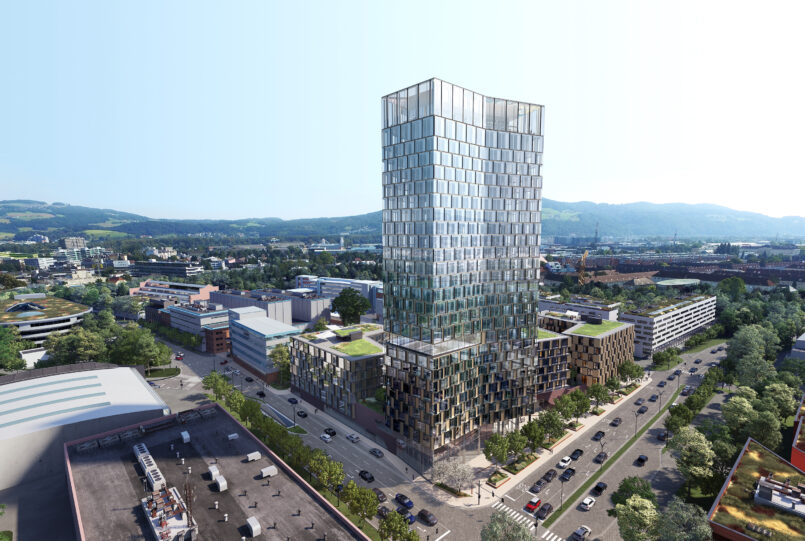 The creative hotspot Tabakfabrik Linz is bursting at the seams. The focus of the resident creative industries and unique start-up scene is on technology, digitization and creativity. With the QUADRILL, the Tabakfabrik and the people who live and work here and in the adjacent neighborhoods are getting urgently needed infrastructure. For the city of Linz, a new, open district and an architectural lighthouse project visible from afar is being created. The neighboring districts of Kaplanhofviertel, Rathausviertel and the Donaulände area will also benefit from the mix of residential, hotel and office uses, retail space and restaurants. There are even efforts to locate a school in the new part of the Tabakfabrik Linz.
“The start of construction in spring 2021, which is almost on schedule, is a cause for celebration not only under the current circumstances. QUADRILL will contribute significantly to the dynamic development of Tabakfabrik LInz and strengthen Linz as a business location. As a connection to the up-and-coming harbor district, this lighthouse project will also provide groundbreaking impetus for urban development,” says Markus Eidenberger, commercial director of Tabakfabrik Linz.

Demolition work for new building to begin in spring 2021

If everything goes according to plan, demolition work on the site will begin in spring 2021. “As planned, the starting signal should be given in February with the first demolition work on the existing, non-listed buildings. Construction should also start on schedule before the end of 2021, once all official permits have been obtained,” says Thomas Bodner, managing partner of the Bodner Group. And: “With the QUADRILL, the dream project of the city government and the Tabakfabrik Linz is being created with spectacular architecture that will enrich the cityscape.” According to Bodner, however, the ensemble should not be reduced to its extraordinary architecture. From the very beginning, he says, the aim was to create a quarter in the creative world of the Tabakfabrik that would be complementary both architecturally and in terms of content. 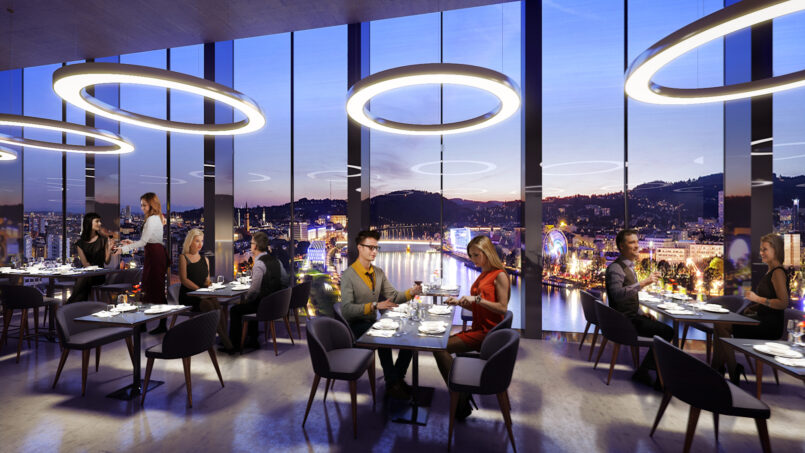 The QUADRILL with all four building parts is economically exploited by the Bodner Group itself, the interest is very high since the start of project. “New, very exciting living space is being created here. Where there was previously space for working space and events, one will soon also be able to live in the creative environment of the Tabakfabrik, the boundaries will be fluid. This is unique and has already now – at a very early stage – developed an enormous attraction for companies, for which a settlement here is of high interest”, says Ralph Lagler, division manager real estate of the Bodner Group and responsible for the exploitation of the residential, office, retail and gastronomy areas (www.quadrill.at).

The entire four-part building ensemble in the Upper Austrian capital of Linz, previously known under the working title “Neubau 3”, will be called QUADRILL. The 109-meter high QUADRILLTower, which will also house the new Arcotel, will be the namesake of the entire building ensemble. The name is derived from the French dance “Quadrille” and is an allegory whose meaning ties in with the Tabakfabrik’s vision of living and working together. The couples’ dance quadrille does not stand for isolated togetherness but emphasizes the togetherness of larger societies. The three new buildings next to the tower will be named Memphis, Balboa and Boston.
Chris Müller, Director of Development, Design and Artistic Agendas at the Tabakfabrik Linz: “The start of construction of QUADRILL initiates the transformation of the Tabakfabrik also in its design and naming. Under the umbrella brand Tabakfabrik, all components, old and new, will come together to form a whole, coordinated range. By 2022, the development of the old building will be completed, but with QUADRILL we are already bringing forward the nomenclature of the entire site, thus creating the basis for a uniform appearance of the entire Tabakfabrik site in the future.”

FACTS & FIgures ABOUT THE QUADRILL TOWER